Lin Dan (VOLTRIC Z-FORCE II LD, SHBSC6LDEX) continues to live up to his title of “Super Dan,” winning his sixth title at the Yonex All England Open Badminton Championships on March 13th. This win comes exactly one week after his brilliant triumph at the Yonex German Open. 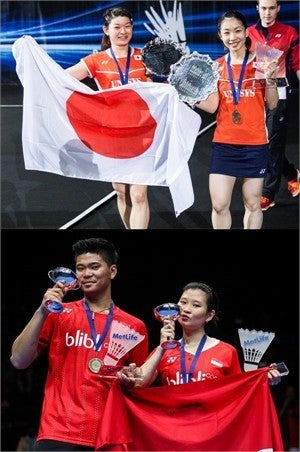 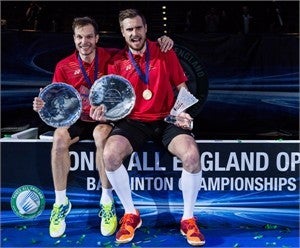 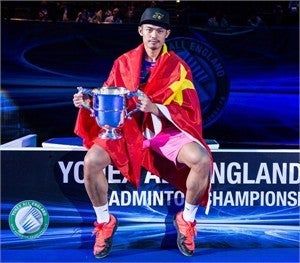 Up against fellow junior teammate Tian Houwei, the five-time World Champion unmistakably made clear the gap in experience between the two, winning in straight games at 21-9 21-10. Lin Dan came out completely outclassing his opponent right from the opening moments, expertly analyzing Houwei’s play and reacting accordingly. The first game ended in under 20 minutes with a slight hairpin over the net. Houwei would crank up the pressure going into game 2, but Lin Dan remained consistently cool; the gap in points growing wider and wider. Of note, Lin Dan’s 19th point came at the end of a stunning rally, with both players reaching into the far corners for their courts to deflect the shuttle, backed by zealous cheers from the audience. Upon landing the point, Lin Dan offered a celebratory dance to his fans. A few moments later, the title was his when Houwei sent the shuttle out of bounds.

Ayaka Takahashi (VOLTRIC 80 E-tune) and Misaki Matsutomo won their very first All England title in women’s doubles, with a comfy victory over Chinese pair Tang Yuanting and Yu Yang. The pair skillfully repelled the points their opponents attempted to set up, proving successful in intense rallies supported by Ayaka’s vigorous attacks. The title was theirs after 47 minutes, the final score coming to 21-10 21-12.

The mixed doubles match of Indonesian pair Praveen Jordan (VOLTRIC 80 E-tune, POWER CUSHION 02 LTD) and Debby Susanto (NANOSPEED 9900, Yonex Shoes) versus Christinna Pedersen (NANORAY 800, POWER CUSHION 02 LADIES) and Joachim Fischer Nielsen proved not just a competition between the athletes on the court, but also the fans in the stands. Backed by cheers of “Let’s go Denmark, let’s go!” and Indonesian fans screaming Praveen and Debby’s names, both duos engaged in vicious rallies in an extended power struggle for points. Despite the Danes’ best efforts, the first game went to the Indonesians by a large margin. The second game would see a more level exchange of points, but Praveen and Debby proved too strong, placing the shuttle neatly into the side of the Danes’ court to win their first All England title at 21-12 21-17.

The day concluded with the men’s doubles final between the unseeded pair of Vladimir Ivanov (DUORA 10, POWER CUSHION COMFORT TOUR) and Ivan Sozonov (VOLTRIC 80 E-tune, Yonex Shoes) against Japanese pair Hiroyuki Endo (DUORA 10) and Kenichi Hayakawa. It was a clash of contrasting play styles; the Russian pair striking with oppressive offence, while the Japanese opted to break their opponents down with on-point defense. However, the true might of the Russian underdogs would not become apparent until the second game and onwards, after the Japanese narrowly secured the opener. A magical combination of Ivan’s keen movements at the net matched with Vladimir’s huge smashes from the back of the court proved to be to the key to success. Game 3 would see Vladimir slam continuous smashes with meteoric power to grab the 16th point—this same attack bringing the underdogs to their championship point.

Vladimir and Ivan won their first Superseries title—and the first Yonex All England title for Russia—on an error by the Japanese, resulting in a successful underdog story if there ever was one. The final score was 21-23 21-18 21-16.

This year’s All England proved historic once again, with firsts for a number of players, along with a big first for Russia. With the first Superseries event of the year concluded, players now have their sights set on New Delhi for YONEX-SUNRISE India Open.