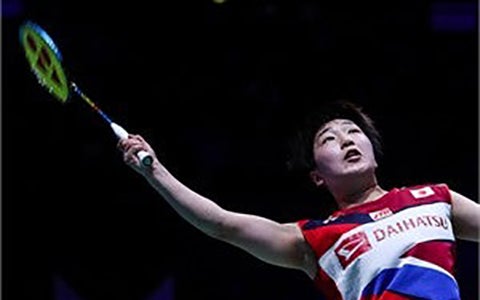 BIRMINGHAM, United Kingdom ­– While there were quite a few surprises on the first day of the 109th YONEX All England Open, Team Yonex demonstrated its depth and strength, pushing through serious contenders in all five categories. The field especially favors the Japan national team, as they line up an opportunity to sweep the tournament.

Leading things off in women’s singles, Akane Yamaguchi (JPN), the 4th seed at this year’s event faced off against 6th seed, He Bingjao of China. Bingjao managed to stretch it to three games, but was unable to come up with answers for Yamaguchi being able to reach seemingly anyhere on the court, winning 21-16, 19-21, 21-12.

Team Yonex and the Japanese national team showed off their true depth in women’s doubles. The first victory of the day went to Shiho Tanaka (JPN) and Koharu Yonemoto (JPN). It took only 48 minutes to get past Indonesian pair Ni Ketut Mahadewi Istarani and Rizki Amelia Pradipta, 21-16, 21-17. Compatriots and reigning World Champions Mayu Matsumoto (JPN) and Wakana Nagahara (JPN) took nearly twice as long to knock off China’s Li Wenmei and Zheng Yu, as they overcame a second game reversal, to win 21-17, 17-21, 21-18. In the final game of the night, World No. 1 pair Yuki Fushima (JPN) and Sayaka Hirota (JPN) faced fellow Team Yonex pair and sisters Gabriela and Stefani Stoeva. After exchanging leads and eventually losing the first game, looking uncharacteristically vulnerable, they had to fight for every point in their 17-21, 21-15, 21-19 victory.

In men’s doubles, the frenetic energy of Keigo Sonoda (JPN) and Takeshi Kamura (JPN) proved far too much to handle for the 7th seeds from China, Han Chengkai and Zhou Haodong. In just over half an hour, they were dispatched to the tune of 21-12, 21-17. Indonesian pair Fajar Alfian and Muhammad Riuan Ardianto battled through a close first game with Malaysians (and newly returned to Team Yonex) Goh V Shem and Tan Wee Kiong, but pulled away in the second to win 22-20, 21-12 in straight games.

While in mixed doubles, rising stars Yuta Watanabe (JPN) and Arisa Higashino (JPN) continued their hot streak from last year. They fought through two close games to prevail over Tontowi Ahmad and Winny Oktavina Kandow of Indonesia, 24-22, 21-19. With their win, Watanabe and Higashino give Japan a chance to sweep all five categories.

For full round details, go here.