In addition to our kickoff party ahead of the Australian Open, YONEX and YONEX players have been on the ground throughout the week putting on events and running activities for the fans. 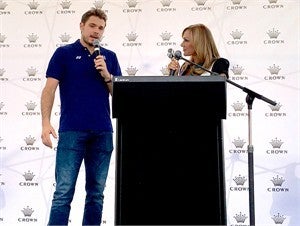 Stan Wawrinka dropped by the Crown Melbourne hotel to meet the fans on the afternoon of the15th. He took to the stage to speak of his new VCORE Duel G, and then participated in an autograph/photo session with some lucky fans.


Take a Picture with Your Favorite Player

Want a unique photo op with your favorite YONEX ‪tennis player? Drop on by the YONEX booth at the Australian Open and take a picture against our green screen for a special CG photo with Stan Wawrinka, Borna Coric, Nick Kyrgios, Lleyton Hewitt, Belinda Bencic, Ana Ivanovic or Martina Hingis. ‪

Lleyton Hewitt is heading into the second round of his final tournament at this year’s Australian Open tonight. Before his first round match, we handed out custom Lleyton Hewitt wristbands at the tournament’s YONEX booth. Colors look familiar? The navy blue wristband, white logo and red “Rusty” are designed to evoke the Australian national flag.