On January 15th, 2016 YONEX celebrated the storied career of Australian tennis legend Lleyton Hewitt in conjunction with the announcement of Stan Wawrinka's new racquet and gear at a press event ahead of the first Grand Slam of the year—the Australian Open. 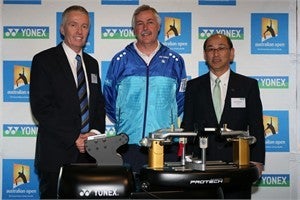 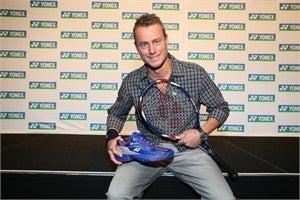 At the event, Lleyton was presented with a commemorative set of tennis gear in honor of his many great accomplishments. The legend received a racquet, wristband, and shoes designed with a navy blue, red and white Australian national flag motif, which he will use as he embarks on the final tournament of his career in his home nation. The racquet will be available for sale in limited numbers exclusively in Australia. “It’s fantastic. To compete with a racquet and shoes in the colors of the Australian flag—it means a lot to finish like this at my home Grand Slam,” the Legend commented with a smile on his face when presented with the exclusive gear.

Lleyton continued, speaking of his long relationship with YONEX. “YONEX just naturally suited my game straight away. I was amazed at the power I got out of the racquet as soon as I picked it up and I never looked back. I have had a great partnership with YONEX for many years. They are a great company to work with. I am so happy I can finish my career using YONEX.”


The same event also saw the unveiling of Stan Wawrinka’s new racquet—the VCORE Duel G. This powerful new addition to the VCORE line was made in close collaboration with Stan the Man himself, giving players ball-crushing power and more spin than ever before. With the VCORE Duel G, players never lose power or speed after the bounce, increasing the height of the ball post-bounce to 14% and overall spin to 8%.

The racquet features the new LOCK BOOSTER SYSTEM on the grommets. This new system increases the amount of holes at the top of the frame, and has grooves that lock the strings in place to crush the ball and boost spin. Furthermore, with the ultra-flexible TOUGH G FIBER material built into the shaft frame, players get more repulsion plus heavy and powerful spin. “Winning Chennai with the VCORE Duel G was a good feeling. It really gives me more spin and more power. I talked to the Yonex team a lot about this new racquet. The entire team even came to Switzerland and we had some great tests,” commented Stan on the brand new racquet.

With YONEX the Official Stringing Partner of the Australian Open for 2016, members of the YONEX Stringing Team were present at the event. Stringer Mark Goodman greeted the audience, and spoke of the team’s craft. The team is the largest within racquet sports with around 700 technicians worldwide and it is the also the only team to string at an international level across three different sports.

Learn more about the YONEX Stringing Team at its official website.