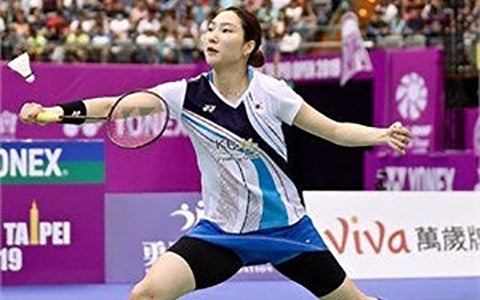 Taipei, Taiwan – Team Yonex delivered a truly dominating performance this past week at the YONEX Chinese Taipei Open. Every player in every category in the finals was Team Yonex, making a full sweep of 1st and 2nd place!

In men’s singles, Chou Tien Chen (TWN) made the most of his opportunity of playing to a home crowd, sailing past Heo Kwang Hee of Korea in just 37 minutes, 21-12, 21-13, to pick up his third Tour title of the year.

The Koreans, who advanced a finalist into every category, took one back in women’s singles, where Sung Ji Hyun (KOR) upset World No. 9 Michelle Li (CAN). Li, who reached the semi-finals of the World Championships last month with a win over then-No. 1 Tai Tzu Ying, seemed to finally run out of gas in yesterday’s final, as Sung never trailed, winning in straight games, 21-11, 21-9. It is her first Tour title since 2016.

Men’s doubles was not to be a one-sided affair, where Goh V Shem and Tan Wee Kiong (MYS) faced off against Choi Solgyu and Seo Sung Jae of Korea. After squeaking out a win in the first game, Goh and Tan fell away in the second, giving their opponents the opportunity to force a decider. The third game looked to be much the same as the second, as they trailed 17-8. But from there they mounted a determined comeback, winning six straight points, and later fighting off four match points to finally draw level at 20-20. They would win 21-19, 15-21, 23-21.

In women’s doubles, things were even more tense. Jongkolphan Kititharakul and Rawinda Prajongjai (THA) earned their first title of the year after an 84-minute battle against Koreans Kim So Yeong and Kong Hee Yong. While the first two games were tightly contested – the first seeing the Thais edge out a win 21-19, and the Koreans in the second, 21-18 – the third game proved to be a thriller. The two pairs matched each other nearly point for point, both sides refusing to give, until finally Kititharakul and Prajongjai emerged to a 28-26 victory.

In mixed doubles, the World No. 10 pair from Hong Kong, Tang Chun Man and Tse Ying Tsuet, upset the 6th-ranked pair from Korea, Seo Seung Jae (who made two finals appearances at the tournament) and Chae YuJung in just 38 minutes, 21-18, 21-10.