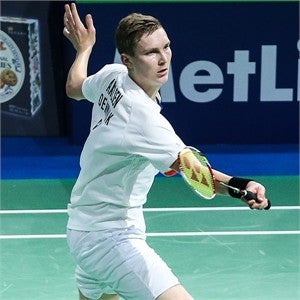 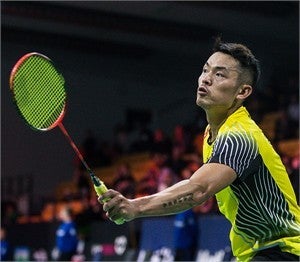 The un-seeded Indonesian made it past several strong opponents on his way to the final round. The quarterfinal saw him go up against No. 2 seed Jan O. Jorgensen (VOLTRIC 80 E-tune, SHBSC6iEX), in an encounter which Tommy would grasp by a thin margin at 21-19, 21-19. He went on to face Taiwan’s Chou Tien Chen (VOLTRIC Z-FORCE, SHB02LTD) in the semifinal, seizing a strong advantage in the opener, grabbing seven consecutive points mid-game. The second act proved to be a tighter affair, with Chou tying Tommy at 20-20 in a bid to force a decider. Tommy had other plans; grabbing point 21 with dynamic smash, finishing with a lightning-fast return that fell out of Chou’s reach for point 22. The match closed at 21-8 22-20.

Young local star Viktor Axelsen (ARCSABER 11, SHB-87EX) placed as a semifinalist, making it past Lin Dan (VOLTRIC Z-FORCE Ⅱ LD, SHBSC6LDEX) with an astounding two-game victory at 21-8, 21-7 in the quarterfinal. He proceeded to face Chen Long in the semifinal, where he put up a strong fight against the No. 1 seed. The Dane started out strong, forcing the Chinese World No. 1 into several errors to clutch the opening game. Local doubles stars Mathias Boe (DUORA 10, SHBSC6iEX) and Carsten Mogensen (DUORA 10, SHB87LTD) also placed as semifinalists, grabbing a victory over China’s Chai Biao and Hong Wei in a tense quarterfinal. The match went in the way of the Danes, with Carsten smashing the shuttle brilliantly into the back corner of the opponents’ court, closing the match at 23-21 23-21.

The ranks of Team Yonex now make their way to this year’s Yonex French Open, which commences on October 20th.