Yonex is proud to announce partnerships with Indian badminton aces Srikanth Kidambi and P. V. Sindhu. Both players boast impressive results across a number of BWF tournaments, and stand tall amongst their fellow Indian players. 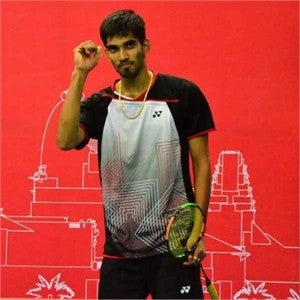 Srikanth is India’s No. 1 male player, and has made great strides for his country with his accomplishments. In 2014, he stunned Lin Dan at the China Open Superseries Premier men’s singles final in straight games, becoming the first Indian male to ever win a Superseries Premier tournament since the introduction of the Superseries. He would pick up consecutive titles in 2015 at the Swiss Open and Yonex-Sunrise India Open, bringing him to a career-high ranking of World No. 3.

As India’s No. 2 women’s singles player, Sindhu has a lot to be proud of at her young age of 20. She became the first Indian athlete in women’s singles to win a medal at the BWF World Championships, securing the bronze medal in 2013; following up on that performance in 2014 with another bronze. In 2015, she defeated current World No. 1 Carolina Marin in the semifinals of the Yonex Denmark Open, eventually placing as finalist at the tournament. Standing at 179cm, she dominates the court with aggressive play.

Both players will take to the court in full Yonex gear at the Yonex German Open Grand Prix Gold, which commences on March 1st. As always, Yonex is happy to support world class talents like Srikanth and Sindhu, providing them with high quality equipment and dedicated support.