Yonex is proud to officially announce new partnerships with two up-and-coming tennis players: WTA World No. 24 (Doubles World No. 2) Caroline Garcia of France and ATP World No. 108 Frances Tiafoe of the USA will be competing with Yonex gear as of the 2017 season. 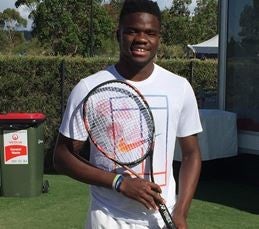 23-year-old Caroline Garcia has a lot to be proud of, accomplishing many great things last season. These achievements include winning two WTA singles titles, winning the Roland Garros women’s doubles title, and placing as the women’s doubles finalist at the US Open. She will be competing with the VCORE SV 100.

“I was interested in Yonex gear after I saw top players like Stan Wawrinka and Angelique Kerber winning big titles,” spoke Caroline about her new partnership, “I can hit with a good mix of power and control using the VCORE SV. It gives me confidence to control rallies and lets me hit deeper.”

Meanwhile, 18-year-old Frances Tiafoe has proven himself to be an influential force on the court, winning 2 ATP Challenger titles in 2016. The rising star started the year competing in the Brisbane International qualifying rounds with the VCORE Duel G 97. “It actually crushes the ball and I can really feel the power when I hit,” said Frances, praising the VCORE Duel G’s ball-crushing power.

Be sure to keep your eyes on these players as they take on the tour in 2017.