YONEX is proud to announce that it has signed a contract with up-and-coming junior player Michael Mmoh for multiple years. 17-year-old Michael Mmoh will compete using YONEX's newest racquet starting this year. 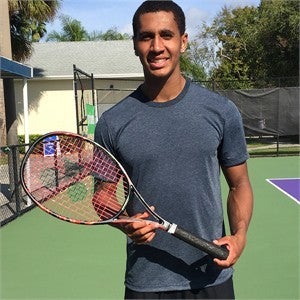 Born in Saudi Arabia and currently residing in the United States, young Michael has made a name for himself on the junior ITF circuit. He reached a career-high ITF junior ranking of No. 2 in August of 2015, and won the boys’ singles title in Roehampton, Great Britain in July. In pro tournaments, he won the title at the Lewis and Clark Pro Tennis Classic (USA F22 Futures) later that same month. A year earlier in 2014, he competed in the main draw of the US Open as a wild card in men’s doubles at age 16. He would proceed to make it into the men’s singles qualifiers at the North American Grand Slam tournament in 2015.

“I am honored to have joined Team YONEX, and looking forward to taking on the 2016 season with YONEX. Happy to be part of the team!” commented the promising young tennis talent on the exciting new partnership.

One of YONEX's main missions is the nurturing of young junior talent. By providing up-and-coming players with YONEX’s top-of-the-line equipment and devoted player support, YONEX does its best to help lead young players along the path to success. Other youngsters who have grown up with YONEX include Belinda Bencic (EZONE DR 100, POLYTOUR HS 125), Nick Kyrgios (EZONE DR 98, POLYTOUR PRO 120) and Borna Coric (VCORE Tour F 97, POLYTOUR SPIN).

YONEX’s strong passion for junior talent can also be witnessed in its robust line of junior tennis racquets, MUSCLE POWER tennis balls for use with PLAY+STAY, and junior footwear. With several high-quality options for young players, YONEX is committed to developing promising talent.

YONEX is extremely excited about its new partnership with Michael Mmoh, and looks forward great years ahead.