YONEX has the pleasure to announce that it has signed a contract with rising Korean tennis star Hyeon Chung for multiple years. Starting this year, Hyeon will compete using the VCORE Duel G 97. 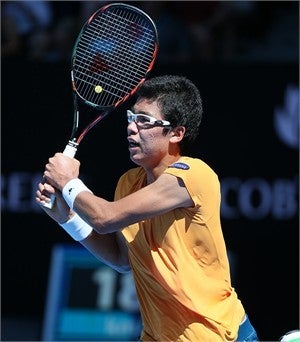 19-year-old Hyeon has begun to draw a great amount of attention to himself with his stunning results starting at the ITF Futures Circuit through to the ATP Challenger Tour. 2014 saw the young Korean player rank highly at local Asian ITF events, earning an impressive three titles. That same year would see him break into the ATP Challenger Tour, being crowned the champion at the Bangkok Open. Leaving a strong impression at both ITF and ATP competitions, Hyeon also won two matches for his country’s Davis Cup team, and was awarded the gold medal in doubles at the 2014 Asian Games.

Hyeon would experience a rapid rise through the ranks in 2015—boosting through to the Top 150 in February, proceeding to make his way into the Top 100 in May. He made his first appearance at the main draw of a Grand Slam at that year’s Wimbledon Championships, winning his first match in the main draw of a Grand Slam at the US Open against James Duckworth. 2015 would see Hyeon go on to triumph at the OEC Kaohsiung Challenger, and reach his first ATP World Tour-level quarterfinal at the 250 series Shenzhen Open. He was selected as the 2015 ATP Most Improved Player for rising over 120 places in the rankings throughout the year.

YONEX is committed to the development of budding talent, and pours a great amount of effort into transforming potential into world class talent. From junior players to youngsters just hitting the tour like Hyeon, YONEX is devoted to nurturing young talent with excellent player support and high quality equipment.