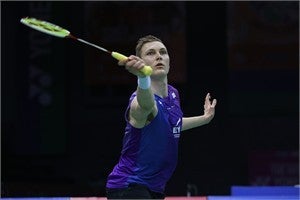 The women’s singles final saw Ratchanok up against Li Xuerui. While both players piled on equal amounts of aggression, it was Ratchanok who prevailed with keen resolve. She remained calm under pressure, in turn pushing it back on her opponent. The ever-increasing stress put on Li was evidenced by her sending the shuttle out on Ratchanok’s first game point, giving the Thai the upper hand. Vicious exchanges of points would continue, but Ratchanok always managed to stay ahead. After an extended rally, the Thai placed the shuttle neatly into the back corner of Li’s court on the final point, earning the title. The final score came to 21-17 21-18.

In women’s doubles, both Ayaka/Misaki and Naoko/Kurumi tore up the court with a similar brand of aggression. However, 2016 YONEX All Open Champions Ayaka and Misaki proved once again that they are the pair with dominance on the global stage. The match ended in straight games for Ayaka and Misaki, 21-18 21-18.