The store will not work correctly in the case when cookies are disabled.
Menu
Account
Settings
Currency
USD - US Dollar
World No. 3 Angelique Kerber (VCORE Si 100, POLYTOUR FIRE 120) continues to impress this season, winning her second title of the year on home turf at the Porsche Tennis Grand Prix. A favorite in her homeland, Angie also won the title last year with this victory marking the first time she has ever defended a title. 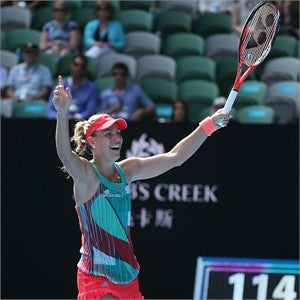 Key ingredients in the German’s recipe for success? The VCORE Si racquet and POLYTOUR FIRE string. With the combination of the VCORE Si’s vicious bite and the POLYTOUR FIRE’s explosive snapback, Angie can generate the extreme levels of spin that perfectly compliment her aggressive game.

Angelique went up against fellow countrywoman Laura Siegemund in the first all-German final in Porsche Tennis Grand Prix history. Angie was up against a giant killer, the opening of the match looking dicey for the Australian Open champ. But with her second consecutive title at the tournament in her sights, Angie turned around her 3-0 deficit. Securing three break points en route, Angie clutched the opening set.

Angie would sprint up to the net for a spirited break with the commencement of the second set, and would dominate from there. Expertly harnessing the power of her famous forehand down the line, Kerber pulled off a straight set win to successfully defend her title, 6-4, 6-0.

Photo taken at the 2016 Australian Open.