The store will not work correctly in the case when cookies are disabled.
Menu
Account
Settings
Currency
USD - US Dollar
Ever since changing to the POLYTOUR FIRE 120, Angelique Kerber has experienced a dramatic raise in rank and performance. She won her second Grand Slam title at the 2016 US Open last week, and reached World No. 1 at the same tournament. 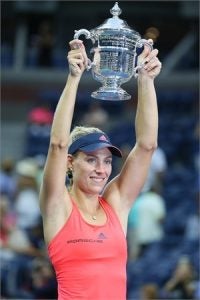 The chart below documents Angie’s success since changing to the POLYTOUR FIRE.

Angie has the distinction of becoming the first tennis player using Yonex strings to ever win a Grand Slam singles title, as well as reach World No. 1. Here is what she had to say about the POLYTOUR FIRE, “My game has changed a lot! It’s such a good string for my game. I can play more aggressively, and I have more spin and touch on the racquet.”