The store will not work correctly in the case when cookies are disabled.
Menu
Account
Settings
Currency
USD - US Dollar
Super pair Martina Hingis (EZONE DR 100, POLYTOUR PRO 125, POWER CUSHION ECLIPSION L) and Sania Mirza continue to prove unstoppable, extending their doubles winning streak to 33 matches with their latest victory over Roberta Vinci and Svetlana Kuznetsova. The duo has remained undefeated since last August, and already have two titles to their name for 2016 at the Brisbane International and Apia International Sydney. 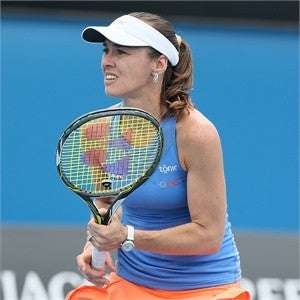 The pair’s victories have been short and sweet, their latest encounter with Vinci and Kuznetsova clocking in at a brief 81 minutes. Proving ruthless on the court, the duo refused their opponents seven of eight break chances, and landed a stunning 38 winners to their opponents’ 21. Without dropping a set, the third-round matched ended at 6-1, 6-3.

In what seems to be a trend for the duo, they have yet to drop a single set yet in this year’s tournament. They stormed into round 1 dominating over Mariana Duque-Mariño and Teliana Pereira at 6-2, 6-3 going on to defeat Ukrainian twins Lyudmyla and Nadiia Kichenok with exactly the same scoreline in round 2.

They will go up against CoCo Vandeweghe (EZONE DR 98) and Anna-Lena Groenefeld in the quarterfinal, who advanced after defeating Mirjana Lucic-Baroni and Barbora Strycova. After splitting sets, CoCo and her partner prevailed strongly in the final set, the match concluding at 7-6(5), 3-6, 6-3.

Martina is also making a strong start in mixed doubles with Leander Paes, winning their first match in straight sets against Anastasia Pavlyuchenkova and Dominic Inglot at 6-3, 7-5.