The store will not work correctly in the case when cookies are disabled.
Menu
Account
Settings
Currency
USD - US Dollar
Belinda Bencic is a true talent amongst tennis’ young female players. She started playing the game from the age of four, and began to practice daily with the mother of Martina Hingis, Melanie Molitor. 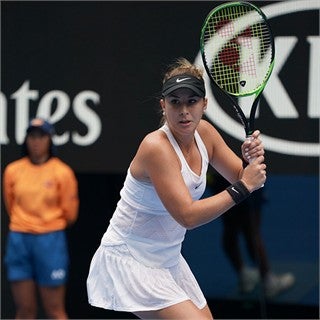 As a junior, she won the 2013 Roland Garros and Wimbledon girls’ singles tournaments. She also made it the finals in the girls’ doubles tournament at the US Open in 2012 and 2013, as well as Wimbledon in 2012. In 2013, she received the honour of ITF Junior World Champion.

As a pro, she made it to the quarterfinals of the 2014 US Open, defeating two top-ten players en route. As a result, she broke in the top-40 for the first time in her career.