The store will not work correctly in the case when cookies are disabled.
Menu
Account
Settings
Currency
USD - US Dollar
CoCo Vandeweghe (EZONE DR 98) found herself on the winner’s podium at the Ricoh Open once again on June 12th after a skillful takedown of No. 3 seed Kristina Mladenovic. The American—who reached the quarterfinals at Wimbledon last year—was crowned champion at the 's-Hertogenbosch tournament 2 years ago in 2014, where she fought up from the qualifiers to seize the title. 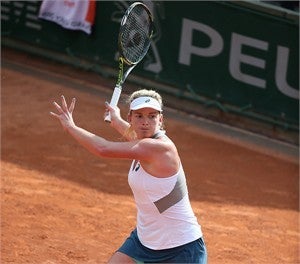 On Grass with EZONE DR

CoCo came roaring into the final with her trademark power game. Armed with the potent EZONE DR, CoCo fired off 7 aces en route to her straight 7-5, 7-5 victory. The American remained resolved and cool-headed despite numerous rain delays, and managed to regain the edge over her French opponent even when the pressure was high.

CoCo landed an important break in set 1 to get one up on her opponent, and the second set would see her harness her impressive net skills to overcome a 5-3 lead. She paved the way to victory by winning the final four consecutive games, landing the winning point with a smoking ace in the corner of Mladenovic’s court.

Belinda Bencic (EZONE DR 100, POLYTOUR PRO 125) also competed at the tournament opposite of CoCo in the draw. Backed up by the powerful EZONE DR, the Swiss placed as semifinalist at the tournament.