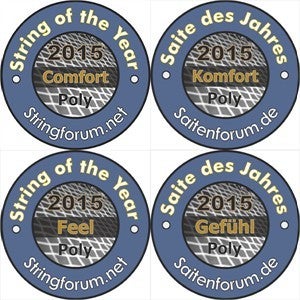 English StringForum.net and German SaitenForum.de boast accomplished reputations amongst European stringers, containing a great amount of string information spanning across all brands, as well as acting as a hub for string experts to share their knowledge. The 2015 survey tallied votes from a record 232 members on the English site, and 136 members on the German site.

Full rankings can be found in the links below.

This past week at the Memphis Open saw Ricardas Berankis reach the semifinals of the tournament and Yoshihito Nishioka make it to the quarterfinals backed up by the POLYTOUR SPIN. Record-breaking Sabine Lisicki also uses the string. Martina Hingis, Nick Kyrgios, Belinda Bencic and Daria Gavrilova have their racquets strung with the POLYTOUR PRO 120 and POLYTOUR PRO 125, and have achieved great results with the strings this season.