The store will not work correctly in the case when cookies are disabled.
Menu
Account
Settings
Currency
USD - US Dollar
Argentina’s Juan Monaco (VCORE Si 98, POLYTOUR PRO 130) is back, earning his second title at the Fayez Sarofim & Co. U.S. Men’s Clay Court Championship. This marks his ninth career title, eighth on clay, and his first singles title since 2013. 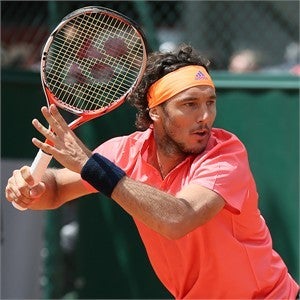 The Argentinian’s victory comes by way of the VCORE Si. The racquet features the Bt Hybrid Stringing System, a grommet design that grants greater string movement for longer dwell time and boosted spin. Angelique Kerber’s (VCORE Si 100, POLYTOUR FIRE 120) victory at this year’s Australian Open was also achieved with the VCORE Si. Along with his racquet, Juan makes his return to the court with the POLYTOUR PRO 130, giving the champ power on the ball along with comfort. The POLYTOUR PRO series has seen great praise for its superior comfort, with the POLYTOUR PRO 120 receiving Stringforum.net’s “String of the Year” award for Comfort in February of this year.

Juan won the title over defending champion Jack Sock. Signs that Juan would usurp Sock’s throne appeared when he broke the American’s streak of straight-set wins to confidently seize the second set. It was the first time any player took a set off Sock at the tournament since dropping one in the first round last year. Boasting a solid serve in that set, Juan was not broken once.

Juan rushed to a 4-1 lead in the third, but his opponent put up resistance in an attempt to defend his title. His attempt would prove unsuccessful, with Juan breaking the American to earn the title, 3-6, 6-3, 7-5. Juan won three of his five matches at the tournament in straight sets, defeating four seeded opponents en route.

“I didn't expect this so fast. No words to describe this moment,” commented an overjoyed Juan on the official ATP website after winning the title. This title is something of a late birthday present for the Argentinian, who turned 32 on the 29th of March.

Meanwhile on the other side of the globe, Borna Coric (VCORE TOUR F 97, POLYTOUR FIRE 125) placed as finalist at the Grand Prix Hassan II in Marrakech, Morocco. This is the Croat’s second time in an ATP World Tour final.

Photo taken at the 2015 Roland Garros.