The store will not work correctly in the case when cookies are disabled.
Menu
Account
Settings
Currency
USD - US Dollar
ATP World Tour #NextGen star Nick Kyrgios (EZONE DR 98, POLYTOUR PRO 120) triumphed in a tight final match against David Goffin to win the third and biggest title of his career at the Rakuten Japan Open on October 9th. 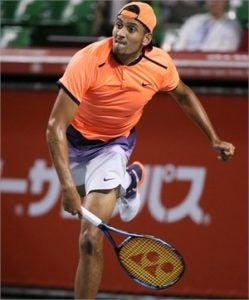 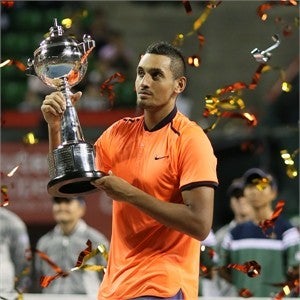 The huge-serving Australian once again commanded the court with his stunning power. Armed with his newly-colored blue EZONE DR, Nick’s serves were clocking in at blinding speeds of over 210 km/h. The champ launched 25 explosive aces, and saved 11 of 12 break points faced. The match also had pivotal moments when Nick would power through two 0/40 deficits.

Nick would seize the match from a set down, gradually taking control using his heavy serves, as well as his keen returns. He sealed the match with a resounding ace down the center line, winning with a final score of 4-6, 6-3, 7-5.

“This racquet gives me the kind of control and power I need. I can literally do anything with this racquet!” commented Nick on the EZONE DR after his huge win.

Nick has now reached a career high of World No. 14 after this third monumental triumph. With the explosive power of the EZONE DR at his side, we can expect him to rise even higher.