The store will not work correctly in the case when cookies are disabled.
Menu
Account
Settings
Currency
USD - US Dollar
More dazzling matches continued to unfold on red clay as Team Yonex players advanced into the second round of Roland Garros. 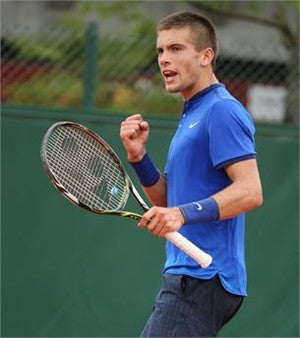 The Power of Team EZONE

Taking to the court armed with the dynamic power of the EZONE DR 98 strung with the super-spin inducing POLYTOUR FIRE 125 string, Borna Coric broke through into the second round of this year’s Roland Garros against American Taylor Fritz.

The 19-year-old Croat made it to the first tour final of his career at the Aircel Chennai Open in January, following up the feat by reaching the Grand Prix Hassan II final in April. Boasting this tour experience, Borna was able to get the edge over his younger opponent with a straight 6-3, 6-1, 6-3 win. Strong on serve, Borna won 82% of his first serve points, also managing to break his opponent’s serve 7 times.

Ferocious forehand-hitting Serb Ana Ivanovic also stepped onto the court with her EZONE DR 98 in hand, meeting up with local hope Oceane Dodin. A former champion at Roland Garros, Ana was quick to serve her opponent a bagel in just 17 minutes. She would win the opening set by breaking her opponent with a forehand return winner. Ana’s opponent would even the match in set 2, but the Serb would power back by rushing to a 4-1 lead in the final set. The match was sealed by way of a forehand swing volley, ending 6-0, 7-5, 6-2.

Juan Monaco (VCORE Si 98) is back in full force on a Grand Slam court, defeating Denis Istomin. Despite dropping the opening set, Pico made a spectacular come back. The Argentinian won his first title of the year on clay at the U.S. Men’s Clay Court Championship, and exhibited the same high level of skill on the red courts of the French capital. Brilliantly orchestrating from behind the baseline, Juan advanced to round 2 with a final score of 3-6, 6-4, 6-3, 7-5.