The store will not work correctly in the case when cookies are disabled.
Menu
Account
Settings
Currency
USD - US Dollar
Ratchanok Intanon (VOLTRIC 70 E-tune, POWER CUSHION 02 LADIES) blazed an amazing trail over the past three weeks, pulling off a historic Superseries hat trick. The 21-year-old Thai won titles at the YONEX-SUNRISE India Open, Malaysia Open and Singapore Open, which concluded on April 17th. Winning three straight tournaments in three weeks is an unprecedented feat by any singles player, and shoots Ratchanok up to World No.1 for the very first time. 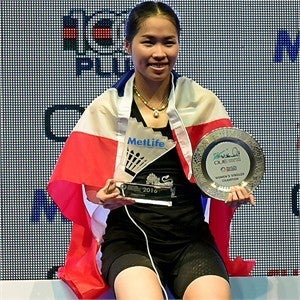 Ratchanok dazzled on the court in yet another Superseries final as the Asian Superseries Trilogy came to a close in Singapore. She was up against defending champion Sun Yu from China, who had looked poised to keep her title after narrowly taking the opening game. However, it was Ratchanok’s peerless finesse on the court that would eventually get the best of the Chinese as her errors began to multiply.

After tying at 10-10 in the opening game, Ratchanok began her onslaught in full force. From 13-11, the Thai racked up 8 consecutive points, setting up game point with a sharp push at the net. She would win the second game by sending the shuttle flying past Sun, neatly into the side of the court. Ratchanok remained dominant in the final game, the gap between the two athletes growing wider and wider as the clock ticked. The title went to the 2013 World Champion when Sun sent the shuttle straight into the net. The final score came to 18-21 21-11 21-14.

Greysia and Nitya earned their second Superseries title at the Singapore Open. The Asian Games gold medalists won three of their matches in straight games, proving once again that the emerging stars have what it takes to shine on the global stage.