The store will not work correctly in the case when cookies are disabled.
Menu
Account
Settings
Currency
USD - US Dollar
It was 4th seed Stan Wawrinka (VCORE Tour G) who grabbed the last semifinal spot at the ATP World Tour finals by beating Andy Murray 7-6 (4), 6-4 to wrap up the group stage at the season-ending tournament on Friday. At the end of a tight first set, Murray led 4-2 in the set tiebreaker but was undone by 5 consecutive points won by Stan the Man. Stanimal continued this momentum into the second set, by breaking his opponent’s serve in the first game. With the early break in the second, the French Open champion was in control as he broke again for a 5-2 lead. Saving off 2 critical break points at 5-4, Stan took the match on his second match point as he forced a wide backhand from the 2nd seeded Brit to advance to his 3rd straight semi-finals appearance at the O2 Arena. 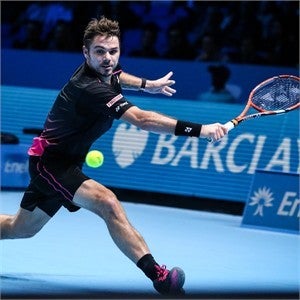 Stan the Man finished the year with a season record of 53-18 and capitalized on every finals appearance this season with 4 calendar titles. These titles include his back to back and 3rd Chennai title, a pair of ATP 500 titles in Rotterdam and Tokyo, and his 2nd career Grand Slam title seized on the famous red clay of Roland Garros. Stan will make his final appearance of the year in the 2nd Annual International Premier Tennis League along with fellow YONEX players Ana Ivanovic (EZONE DR 98), Belinda Bencic (EZONE DR 100, POLYTOUR HS 125), Nick Kyrgios (EZONE DR 98, POLYTOUR PRO 120), and Sabine Lisicki (VCORE, POLYTOUR SPIN).