The store will not work correctly in the case when cookies are disabled.
Menu
Account
Settings
Currency
USD - US Dollar
YONEX is proud to have hosted the fantastic finale of the Legend’s Vision World Tour in Kuala Lumpur, Malaysia. Home of YONEX legend Lee Chong Wei, Kuala Lumpur is a fanatical sporting city and we certainly saw that demonstrated in the sheer number of fans supporting this final event of The Legends’ Vision World Tour. 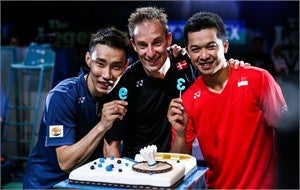 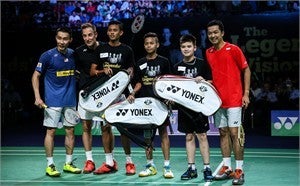 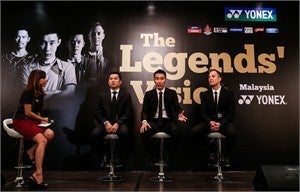 The final Legends' event in 2015, kicked off in the morning of Tuesday, December 15th with a talk show aimed at the media. The talk show was opened by Ben Yoneyama, Chairman of YONEX, followed by speeches from the Deputy President of the Badminton Association of Malaysia and the Sports Minister Khairy Jamaluddin about the success of The Legends’ Vision and the positive impact it is having on the sport of badminton globally. The three Legends present, Lee Chong Wei, Peter Gade and Taufik Hidayat, answered series of insightful questions around the future plans of The Legends Vision in conjunction with Yonex.

The main exhibition event began at 3pm, hosted at the Stadium Badminton Cheras, where the Legends showcased their mesmerizing talent and skills in a series of matches and demonstrations. Lee Chong Wei, Taufik Hidayat and Peter also took the floor with local children from the badminton schools as well as the winners from the social media competitions which ran through December in the lead up to the prestigious event. The Legends conducted a masterclass in trick shots, each displaying the signature shots that they are so famous for. The crowd were amazed to see Taufik’s renowned backhand smash, Chong Wei’s awesome forehand net lift and Peter Gade’s impressive deceptive shots.

The court continued to be the scene of some thrilling matches as the day continued, when the three Legends were joined by Malaysian players Cheah Soon Kit, Koo Kien Keat and Tan Boon Heong, as well as renowned Olympic champion and 7-years Malaysian coach Rexy Mainaky. The Legends of the game brought together the stars of badminton from the past, present and future in an exciting and fun arena.

Family man, Lee Chong Wei, was also joined by his wife, Wong Mew Choo, for an action packed game on court. Proving that badminton is a very important part of his life – on court and at home.

Not only did the event demonstrate the tremendous skills and technical abilities of our Legends, it also showed their passion for the sport and their friendship to one another. To conclude the event, Peter Gade was presented with a birthday cake and serenaded by the arena to celebrate his 39th birthday that was on December 14th!

Through this event in Kuala Lumpur and The Legends’ Vision World Tour this year, the Legends together with YONEX are raising the level of the game of badminton commercially. As part of the Malaysia event, live streaming was available online, offering all the chance to be in the presence of greatness and join YONEX for a once in a lifetime event. Whether through supporting local badminton clubs, giving back to the sport or being a positive role model to the next generation of rising stars, the Legends are keen to move the sport forward on many fronts in the next few years.

Through The Legends Vision, YONEX strives to further enrich the world through sport, providing happier and healthier lifestyles in today’s aspiring badminton stars.