The store will not work correctly in the case when cookies are disabled.
Menu
Account
Settings
Currency
USD - US Dollar
The final stop on The Legends’ Vision 2015 World Tour is rapidly approaching. The end of this year’s tour is to be held in none other than the home to badminton Legend Lee Chong Wei—Malaysia. 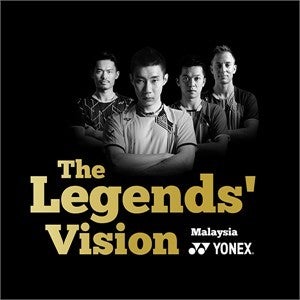 This last Legends’ Vision event is to be held on December 15th at Stadium Badminton Cheras (Stadium Badminton Kuala Lumpur). Much like previous events in China, Indonesia and Denmark, badminton Legends Lee Chong Wei, Lin Dan, Peter Gade and Taufik Hidayat will continue their efforts to spread the appeal of badminton further across the globe.

There is no place more fitting for the final Legends’ Vision event than Malaysia. Teeming with a large and active population of badminton fans, this final event is shaping up to be another exciting occasion. Host Lee Chong Wei’s achievements within badminton require no introduction, and he stands as prolific figure outside of the sport as well. He has been bestowed with the Malaysia national honor of Dato’, and was described by Prime Minister Najib Razak as a national hero.

Details for the event can be found on its official page, with more to be revealed in the coming weeks.