The store will not work correctly in the case when cookies are disabled.
Menu
Account
Settings
Currency
USD - US Dollar
The Yonex EZONE DR tennis racquet is getting a visual makeover this October. Introducing the new blue EZONE DR—the newest addition to the EZONE line, featuring the same features of the original with a bold new design. The young and spirited Nick Kyrgios will start competing with the new racquet at the 2016 Rakuten Japan Open. 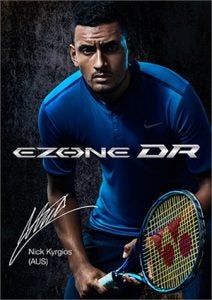 A new promo video for the racquet featuring Nick is now live. Check it out below.

“It stands out,” commented Nick, praising the new design. “I like to be different and stand out on the court.” Nick used the EZONE DR to win his very first ATP World Tour title at the Open 13 Provence tournament, following it up with another title at the BB&T Atlanta Open.