The store will not work correctly in the case when cookies are disabled.
Menu
Account
Settings
Currency
USD - US Dollar
Team Yonex continues to boast great performance on day 3 of the US Open. 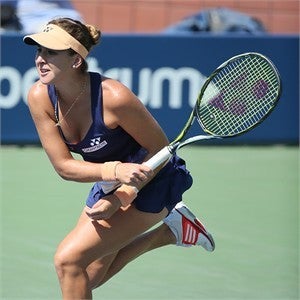 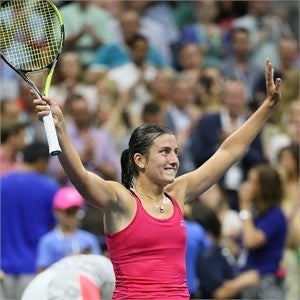 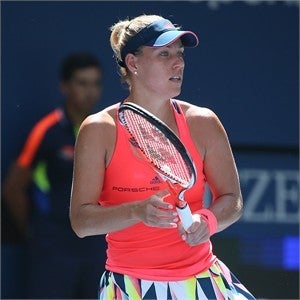 The Advance of Angie

Australian Open champ Angelique Kerber (VCORE Si 100, POLYTOUR FIRE 120) has advanced to the third round of the US Open for a sixth straight year, booking a straight-set win over Croatian Mirjana Lucic-Baroni. The World No. 2 commanded from the baseline, harnessing the power of her potent groundstrokes to quickly grab a 4-0 lead. She would finish off the opening set with a resounding ace.

The second set would see Angie’s opponent ramp up the intensity, but the German remained resolute. Determined to prevent a third set, Angie saved 3 set points to win the match, 6-2, 7-6(7).

The biggest upset of the day came via Anastasija Sevastova (EZONE, POLYTOUR PRO 125, POWER CUSHION ECLIPSION L) and her clinical takedown of No. 3 seed and 2016 Roland Garros champion Garbiñe Muguruza. After an extended period of time away from the tennis court, Anastasija impressed all the spectators in Arthur Ashe Stadium. The 26-year-old Latvian powered past her Top 5 opponent in the tight opening set, proceeding to rush to a 5-1 lead in the second set. Anastasija grabbed 7 break points en route to defeating her first Top 5 opponent at 7-5, 6-4—the biggest win of her career.

Members of Team EZONE have broken through into the third round with confident straight-set wins.

19-year-old Belinda Bencic (EZONE DR 100, POLYTOUR PRO 125) is into her third straight US Open third round, soundly defeating German Andrea Petkovic 6-3, 6-2. Belinda came fighting right out the gates, rushing to a 3-0 lead. While her German opponent evened the score at 3-3, Belinda remained strong. Keeping pressure on her opponent, Belinda forced a number of errors, and landed winners to seal the opening set. The two would draw even early in the second set, but Belinda quickly gained control to finish the match.

Meanwhile, Naomi Osaka (EZONE DR 98, POLYTOUR PRO 130/TOUR SUPER 850) advanced without dropping a set against China’s Ying-Ying Duan. She won the first set with an ace, and persevered strongly in the second set’s tiebreaker to win 6-4, 7-6(3).


Defending Champs into Round 2

Men’s doubles defending champs Pierre-Hugues Herbert (VCORE Duel G 97, POLYTOUR FIRE 125) and Nicolas Mahut picked up an astounding 13 aces in their first round match against the local pair of Mackenzie McDonald and Martin Redlicki. After persevering through a tense tiebreaker in the first set, the French pair prevailed at 7-6(8), 6-1.