The store will not work correctly in the case when cookies are disabled.
Menu
Account
Settings
Currency
USD - US Dollar
On March 11th, 2016 Yonex renewed its partnership with the Badminton Europe Confederation to act as the official equipment supplier for all events run by the BEC at a signing ceremony and press conference held at the 2016 YONEX All England Open Badminton Championships. 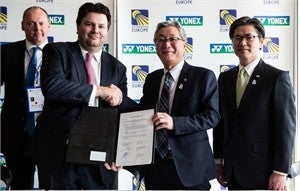 The multi-year contract will see Yonex provide equipment and stringing service at tournaments such as the European Badminton Championships, which have seen the likes of Peter Gade crowned champion several times. 2014 saw world class athletes Jan O. Jorgensen and Carolina Marin grab the title in their respective disciplines. Held every two years, this year’s event will be held in France between April 26th and May 1st.

Along with providing support for BEC tournaments, Yonex will also be providing badminton starter sets to schools throughout the European continent to promote badminton to the next generation. Through activities such as these, Yonex is committed to the further development of badminton throughout the world.

The Badminton Europe Confederation was founded in 1967, and carries out comprehensive governance of badminton throughout the European continent. With 52 member associations, BEC organizes a great number of badminton events within the continent in association with the Badminton World Federation.