The new EZONE makes a bang at the Bank of the West Classic!

CoCo Vandeweghe was the runner up in Women’s Singles, and the winner in Women’s Doubles at the 2017 WTA Bank of the West Classic, which concluded on August 6. CoCo began using the new EZONE 98 at this competition, and her results immediately reflect the racquets' outstanding performance. 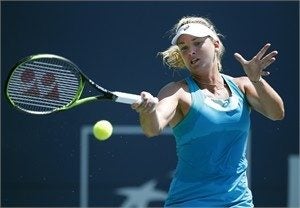 "I am looking forward to making the most the new EZONE at the US Open Series" CoCo, commented after the tournament. The explosive power of new EZONE which adds a powerful strike and service, CoCo "was able to win many aces with outstanding confidence" she concluded.

Be sure to stay tuned to her performance at the US Open later this month!