American tennis player Steve Johnson has signed on with Yonex for the 2017 season. The 27-year-old World No. 26 player has been playing with the Yonex VCORE SV 98 since the beginning of this year. 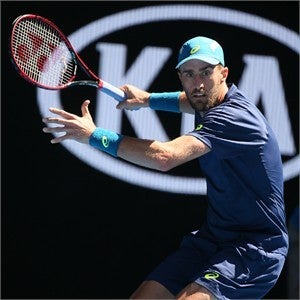 Steve turned pro in 2012 after graduating college, and picked up his first ATP World Tour title last year at the Aegon International. Possessing strong serves and forehands, the American has been making a name for himself on the tour with his aggressive game. He is also accomplished at the net, stunning his opponents with a strong serve and volley game.

“I developed an interest in Yonex racquets after seeing many top players achieve great things with them,” spoke Steve of the new partnership. “I was especially taken with the racquet’s square (ISOMETRIC) head shape. With the bigger sweet spot, I can strike back with great power even in tough situations,” he continued.

“The VCORE SV has really great power and control,” commented Steve on his new racquet, “I can hit a deeper ball now, and really get the edge over my opponents.”