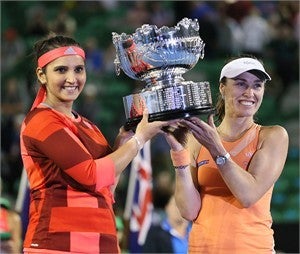 The final saw the No. 1 seeds go up against Czech pair Andrea Hlavackova (Yonex Racquet, POLYTOUR PRO 125) and Lucie Hradecka. The opening set proved to be a very close encounter, but the Swiss-Indian pair refused their opponents a chance to get the edge, dominating in the tiebreak that closed out the set. Martina and her partner would regain full control in the second set, rushing to a 4-1 lead. Martina demonstrated excellent control throughout the match, leading the pair to victory at this year’s Australian Open with a final score of 7-6(1), 6-3.

After successive Grand Slam wins at Wimbledon and the US Open last year, this marks the pair’s third consecutive major title together. Martina and her partner only dropped one set on their road to victory, with their winning streak clocking in at 36 match wins. Santina truly remains unstoppable.

CoCo Vandeweghe (EZONE DR 98) and Horia Tecau advanced to the mixed doubles final, triumphing over Andreja Klepac and Treat Huey in straight sets at 6-4, 6-4. The pair refused their opponents a single break point, and hit an outstanding 36 winners to their opponents’ 25.