In the midst of the ATP World Tour Finals in London, 18 year-old Denis Shapovalov was honored during the ATP award ceremony. After a sky rocketing year in the rankings, the young Canadian was selected as Most Improved Player of the Year and earned the award for Star of Tomorrow, which is presented to the youngest player within the Top 100 of the Emirates ATP Rankings. 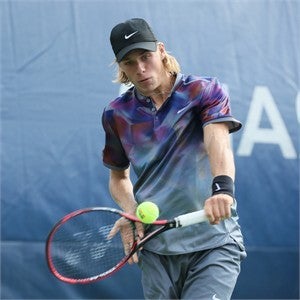 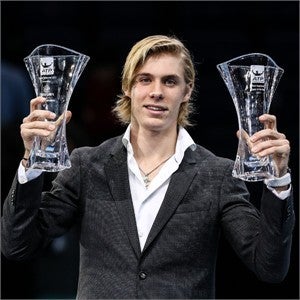 “I cannot believe that I have won two awards. I worked hard for this series. I want to win an APT World Tour title next series and finish in the top 25,” said Shapovalov confidently in front of the large crowd of the O2 Arena.

Having signed on with Yonex in June, Shapovalov’s switched to the VCORE SV and jumped up from outside the Top 250 at the start of the season to a career high of World No. 49 in late October. His remarkable 2017 run has come with big results on tennis’ biggest stages. He became the youngest ever semi-finalist at an ATP World Tour Masters 1,000 event with wins over Juan Martin del Potro and Rafael Nadal at the Rogers Cup and was the youngest player to make the 4th round of the US Open since 1998. Finishing the year on a high, we can expect even greater achievements from the Canadian in the coming future.

Meanwhile, at the Taipei OEC Open held in Chinese Taipei, comeback kid Belinda Bencic won her second consecutive tournament playing with the new EZONE. With the power of the EZONE backing the Swiss, Belinda will be returning to the Top 100 with a hot 10 match win streak. Be sure to keep an eye on her rapid progress next season at the Hopman Cup.