Sunday, February 19th saw big wins for Japan and Denmark at the two continental tournaments leading up to the 2017 Sudirman Cup. 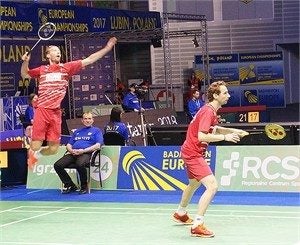 Team Japan would go on to meet Korea in the final, and the young Akane continued to brilliantly carry the torch for her country. The final women’s singles matchup put Akane up against World No. 3 Sung Ji Hyun; the 19-year-old coming back from the brink to pull off an astounding 22-20, 23-21 win. Game 2 would see Akane gradually climb up from a 10-point deficit, scoring 7 straight points, attempting to close the gap. Akane’s tenacity was undying, landing five more straight points up from 12-15 to take the lead, and eventually sealing victory.

Defending champions Denmark maintained their title at the European Mixed Team Badminton Championships in Lubin, Poland, earning a straight 3-0 win over Russia, who were in their first ever final at the tournament.

The final of Denmark vs. Russia opened with the mixed doubles pairs of Christinna Pedersen (DUORA 7, POWER CUSHION 02 LTD)/Joachim Fischer Nielsen and Ivan Sozonov (VOLTRIC 80 E-tune, POWER CUSHION 65)/Ekaterina Bolotova going head-to-head. While the two duos struggled for dominance in the opening game, Denmark reigned supreme in game 2, winning 24-22, 21-10 in 45 minutes. This is Denmark’s 16th victory out of 24 editions of the tournament.

The 2017 Sudirman Cup will be held between May 21st and 28th in Gold Coast, Australia.