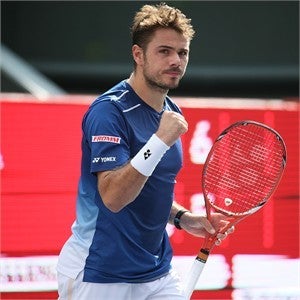 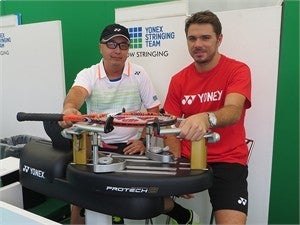 The Swiss World No. 4 commenced with a strong opening set, blasting ahead of Ito after exchanging a few games, landing 2 aces en route towards sealing set 1. While the local rival managed the draw even in the second, Stan remained poised heading into the decider to turn things around. Upon sinking a return on Ito’s side to grasp a crucial early break, the Swiss regained control of the match. Recording seven aces in total throughout the match, Stan the Man advanced to the quarterfinals after launching a searing forehand down the line. The final score came to 6-3, 2-6, 6-4.

Yonex players set to compete today include No. 2 seeds Pierre-Hugues Herbert (VCORE Tour G) and partner Nicolas Mahut in doubles, who will go up against the un-seeded Aisam-UI-Haq Qureshi and Gilles Simon for a spot in the semifinals. The Frenchmen won his very first doubles title at the Japan Open last year paired with Michal Przysiezny. He recently won the US Open men’s doubles title with his current partner—becoming the first French player to do so—and hit the winning point in that final match. Also heading to court today is  Nick Kyrgios (EZONE DR 98, POLYTOUR PRO 120) in men’s singles, who will go up against Spain’s Roberto Bautista Agut.

Earlier on in the week, Stan and Borna Coric paid a visit to the YONEX Stringing Team—the official stringer for the tournament. Both players got a hands-on experience with the machines behind the booths, and spoke of the kind of stringing that works best for them. The stringers themselves spoke about how they got into stringing in the first place. Some got into the business after seeing a need to take the standard of stringing to a higher level, while others found a passion in experimenting with the craft. The team continues to practice their stringing dyed deep with those same strong feelings, providing excellent service for all players, both pro and amateur.