SAN DIEGO --Named after the legendary tennis player and social activist, the USTA Billie Jean King Girls’ 18 and Girls' 16 National Championships were held in San Diego last week. With wildcards to the U.S. Open on the line, the top juniors were vying for their chance to compete in New York. 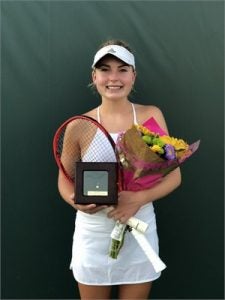 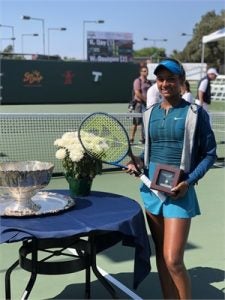 In the 18-and-under division, 16-year-old Whitney Osuigwe (EZONE 98 / POLYOUR PRO 125) was looking to win at least one more match than she did the previous year. The Florida native reached the semifinals in 2017 but fell to the eventual winner.

This year, Osuigwe’s semifinal match was arguably even tougher. The 2nd-ranked junior in the world faced ITF world No. 1 Cori (Coco) Gauff in front of a standing room-only crowd.

After saving five set points in the opening set, Osuigwe staged a comeback to win the first set in a tiebreaker. Gauff was able to rebound to force a third and final set, but Osuigwe’s experience was too much for 14-year-old Gauff, as she won the match 7-6, 3-6, 6-4.

Osuigwe was guaranteed a wildcard into the U.S. Open Women’s Qualifying Draw by reaching the finals, but a win in the championship match meant Osuigwe would receive a wildcard into her first-ever Grand Slam main draw.

In the finals, Osuigwe met local Californian Kayla Day, who was the 2016 champion. Day raced out to a 5-1 lead in the first set, but like she did in her semifinal match, Osuigwe fought back to capture the first set. With the momentum on her side, Osuigwe won 12 of the last 15 games for a 7-5, 6-3 victory.

“I’m really happy,” said Osuigwe. “I’m happy that I could get through it and that I’m playing the U.S. Open.”

“I like being in the center of attention,” said Crawley. “It comes with added pressure but that just means to focus more.”

With her victory, Crawley will receive a wildcard into the U.S. Open Junior Championships. This will be the 16-year-old’s first appearance at a junior Grand Slam.