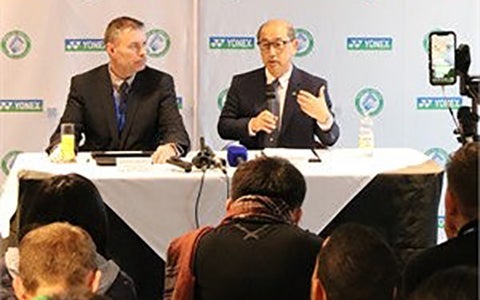 Having been the title sponsor of the All England Badminton Championships for 36 consecutive years, Yonex Co., Ltd. has reached an agreement with Badminton England to extend the sponsorship through 2025, which will make it 42 consecutive years. The extension was announced at a press conference at this year’s All England tournament, currently underway.

The YONEX All England Open is regarded as the one of the most prestigious tournaments in badminton, having been the stage for some of the most memorable matches and moments involving the world’s greatest players, and is expertly run and organized. Yonex chairman Ben Yoneyama stated that it was for these reasons that Yonex has sponsored the world-leading championship for so many years, and provided it with best-in-class gear and the highest quality shuttlecocks. He stated that it is the combined goal of Yonex and Badminton England to ensure that the YONEX All England Open remains at the pinnacle of the world’s top championships.

“It is very important the YONEX All England retains its traditions while also continuing to improve on its flagship position. Its exposure and presentation, both live and through media coverage, is vital to not only achieving this, but also in its contribution to the development of badminton throughout the world. I would encourage everyone involved in the media to make an even greater effort to “shout about” the YONEX All England and the great sport of badminton,” he said.