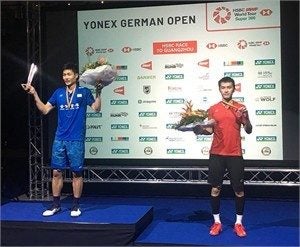 With the success of Yamaguchi, who uses the ASTROX 77, and of Fukushima, Hirota, Inoue, and Kaneko, who began using the new ASTROX 88 S and 88 D at this tournament, three out of the five events were won by players using ASTROX! Fukushima and Hirota defeated the runners up of the YONEX Swiss Open in straight sets in their semifinal matchup, on their way to winning their second consecutive title. Inoue and Kaneko showcased their offensive play in the finals to achieve a come-from-behind victory. Their delight was apparent at having won their first title since last year's victory at the US Open.

In men's singles, Tien Chen (CHN) defeated Ng Ka Long Angus (CHN) in a faceoff of players using DUORA racquets. This was also Ka Long's first second-place finish since he adopted the newly released DUORA 8 XP. Both players will try to carry the momentum from their strong finish into this week’s YONEX All England championships.