Kyrgios, who said Wimbledon was his “best chance to win a Grand Slam out of all the four,” will play Brandon Nakashima for a spot in the quarterfinals, which is also the furthest round he has reached at a major (Wimbledon, 2014).

Tatjana Maria and Marie Bouzkova, who both have a career-high ranking of 46, continue to collect underdog wins. Maria is making her comeback after giving birth to her second daughter, while Bouzkova is finding her form at just the right time, defeating a trio of Americans in the first three rounds.

Caroline Garcia continues to overpower her opponents. Her aggressive, net-attacking style helped her advance in two tiebreak sets. Garcia also leads the tournament in aces with 28, firing 16 in her third-round victory.

Elena Rybakina is having an equally impressive Wimbledon with another straight-set victory. She ranks No. 2 in the tournament in aces fired behind Garcia and has yet to drop a set.

Tim Van Rijthoven continued his remarkable grass court season with a straight-set victory over the 22nd seed. Van Rijthoven is just the seventh ATP player since 2000 to reach the fourth round in his Grand Slam debut.

Frances Tiafoe will be joining Van Rijthoven in the second week. Despite dropping his first set of the tournament to Alexander Bublik, Tiafoe won the next three sets to move on with a 4-set victory. 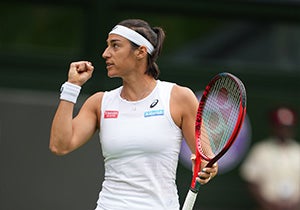