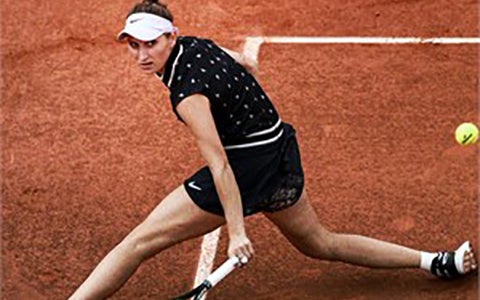 PARIS, France- For the fourth consecutive Grand Slam, Team Yonex was represented in the Championship match. 19-year-old Marketa Vondrousova (CZE) breezed through the bottom half of the women’s draw without dropping a set en route to the finals.

The rising Czech star doubled her career win total at Grand Slams and currently owns the best win-loss record on the WTA tour since the Australian Open. Vondrousova has also reached the quarterfinals or better in each tournament she has played since then.

In the finals, Vondrousova faced a red-hot Ashleigh Barty (AUS), who captured her first Grand Slam title and is currently the second-ranked player in the world.

“I played my first Grand Slam final, so it's a good thing," said Vondrousova after finishing runner-up in Paris. "I think I'm proud of myself at everything, because I'm just 19 and I won six tough matches.”

After her performance in Paris, Vondrousova catapulted into the WTA top-20, coming in at 16 in the most recent rankings.

“This is what we are working hard for," said Babos. "We are not necessarily like doubles specialists, but it somehow turns out to be that we are really good at it, and we really complement each other well.”

Team Yonex was also well-represented in the junior and wheelchair divisions. Americans Toby Kodat and Emma Navarro both reached the singles finals in their first Roland-Garros appearance on the boys’ and girls’ side, respectively. Navarro also teamed up with Chloe Beck to win the Girls’ Doubles title.

“It feels a bit unreal to be honest,” said De Groot. “There was a lot of pressure on me but I’m just really happy that I managed to keep it together.”

After winning his second career singles’ title at Roland-Garrros, Fernandez teamed up with Shingo Kunieda (JPN) in the doubles final. After losing the first set, Fernandez and Kunieda forced a match tiebreaker, where they would eventually come out on top, 2-6, 6-2, 10-8.