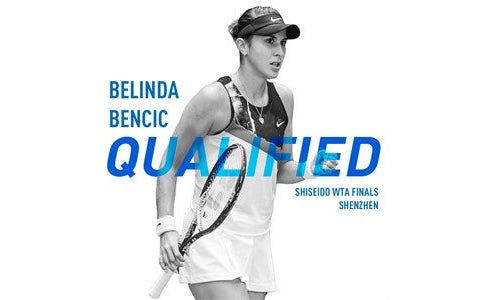 MOSCOW — After winning her second WTA title of the year at the Kremlin Cup in Russia, Belinda Bencic (SUI) called her performance in the finals "the cherry on top."

Bencic was a last-minute addition to the field in Moscow, needing to reach the finals to qualify for the Shiseido WTA Finals in Shenzhen. In her opening round match, Bencic found herself down 0-3 in the deciding set before rallying back with a 1-6, 6-3, 6-4 victory.

In the quarterfinals, Bencic came back from 1-4 down in the opening set and saved two set points to force a tiebreaker. Eclipsing the one-hour mark in the match, Bencic finally secured the first set 10-8 in a tiebreaker and carried that momentum into the second, escaping with a 7-6, 6-1 win.

With her 2019 season riding on her semifinal match, the 22-year-old admitted how nervous she was before stepping on the court. However, Bencic kept her emotions in check from the beginning and advanced in straight-sets.

“I stepped up my game when I had to, just really focused on myself,” said Bencic. “I knew it was just one match away, and it was a unique opportunity.”

In the finals, Bencic again rallied from a set down and won 12 of the last 14 games to wrap up her stay in Moscow with the trophy. With her victory, the 22-year-old climbed three spots in the rankings to match her career-high of 7.

How Bencic secured her first appearance at the year-end championships:

"It means the world to me,” said Bencic after qualifying. Obviously, it was a big goal this season, particularly after I started it so strongly, and having put myself in a position to reach the WTA Finals, I’m so happy now to have reached it.”