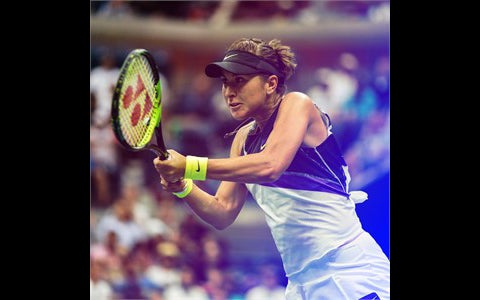 FLUSHING MEADOWS, NY — Stan Wawrinka (SUI) reached the peak of his career in 2016, defeating World No. 1 Novak Djokovic in the US Open finals as the third-ranked player in the world.

Nearly three years to the day, Wawrinka returned to Arthur Ashe Stadium again to take on Djokovic, who has held the top spot in the rankings for the last 44 weeks.

In the pair’s 25th-career meeting, Wawrinka returned to championship form, hitting 8 aces in the opening set alone and riding an early break to take the advantage.

To begin the second, Djokovic jumped out to a 3-0 lead, then 4-1, but Wawrinka broke back and got his first lead of the set at 6-5. An easy hold gave Wawrinka a 2-set lead and the finish line was near.

“The more the match was going, the better I was playing,” said Wawrinka. “I was hitting the ball really hard.”

After breaking Djokovic at love at 1-1 in the third, the World No. 1 retired with a left shoulder injury.

Donna Vekic (CRO) began Day 8 action under the roof on Louis Armstrong in front of a packed stadium, as play on outside courts was delayed due to rain.

Throughout the entire match, Vekic was constantly facing an uphill battle and at one point, she trailed 7-6, 5-3.

“When she was serving for 5-4, I was really thinking I could win this game and try to turn the match around," said Vekic. "I'm happy to win and I'm happy to win saving match points, happy to be first time in the quarterfinals.”

Vekic faced a match point in the 5-4 game but survived and eventually forced a third set. At 3-3, Vekic converted on her 4th break point opportunity of the set and carried that momentum to a 6-7, 7-5, 6-3 victory.

It was a Team Yonex clash to open play on Arthur Ashe an hour later. Naomi Osaka (JPN) and Belinda Bencic (SUI) squared off for the third time this year.

“The challenge cannot be bigger than Naomi," said Bencic, who last reached a Grand Slam quarterfinal in her 2014 US Open debut. “I had to be at the top of my game. I'm pleased how I managed my nerves.”

Bencic’s 7-5, 6-4 victory over Osaka was her ninth win over a top-10 opponent in 2019 - the most amongst WTA players this year. She will play Vekic for a spot in the semifinals on Wednesday.