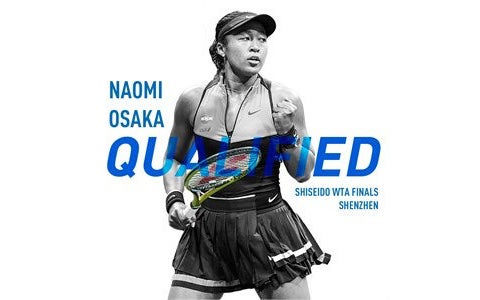 TOKYO - Naomi Osaka (JPN) has qualified for the Shiseido WTA Finals in Shenzhen. Currently ranked No. 4 in the world, Osaka secured her spot at the year-end championship with a three-set victory over Bianca Andreescu in the quarterfinals at the China Open.

Osaka’s 2019 began with a bang, as she became the first Japanese player - male or female - to sit atop the world rankings after winning her second consecutive Grand Slam at the Australian Open.

Having never dropped out of the top-5 all year, Osaka regained her winning ways in her birthplace of Osaka, Japan last month, taking the Toray Pan Pacific Open title without dropping a set. She then won her 10th-straight match and second consecutive title of the Asia Swing with a come-from-behind victory over Barty in the China Open finals.

This will be Osaka’s second consecutive appearance at the WTA Finals, where a combined $14 million is on the line making it the largest prize money offering in the history of men’s and women’s professional tennis.